Award-winning poet, Lorna Goodison has confirmed her participation at Palaver 2016, to be held over two days, August 6 and 7, in Wasaga Beach, Ontario, Canada.

One of the most admired and accomplished poets of the Caribbean, Professor Lorna Goodison comes to Palaver with an international reputation, a stellar bibliography and a string of awards dating back almost 30 years. Included are a Commonwealth Writers’ Prize for the Americas; a Musgrave Gold Medal from the Institute of Jamaica; the 2008 British Columbia Award for Canadian Non-fiction; and, the Shirley Verrett Award which acknowledges the work and achievements of a faculty member at the University of Michigan. 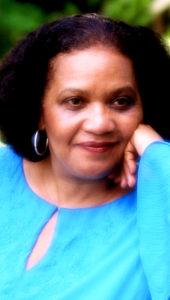 One of the most gifted and prolific writers of our time, Lorna Goodison pursued an illustrious academic career, punctuated with professional assignments for the advancement of literature and culture in Europe, North America and the Caribbean, yet she made time to author numerous short stories and some 15 volumes of poetry. And, even with an already full schedule, she demonstrated her support for the Palaver International Literary Festival by penning a special poem for the inaugural event. That poem was published in the first edition of CHAPTER (the souvenir booklet of the Palaver festival) in 2015.

Lorna Goodison published Tamarind Season, her first book of poetry, in 1980. That was followed by I Am Becoming My Mother, her first ‘big’ success, which won for her the Commonwealth Writers’ Prize. Later volumes included Heartease (1988), To Us, All Flowers Are Roses (1995), Turn Thanks (1999), Guinea Woman (2000), Travelling Mercies (2001), Controlling the Silver (2005), and Goldengrove (2006). Included in her biography are three collections of short stories including Baby Mother and the King of Swords (1990) and Fool-Fool Rose Is Leaving Labour-in-Vain Savannah (2005) and From Harvey River: A Memoir of My Mother and Her Island (2008). (See lists below.) Her work appears in the Norton Anthology of World Masterpieces.

Her writings, characterised as insightful, honest and unpretentious, celebrates humanity and the determination and indomitable spirit of the peoples of the Caribbean and particularly from her own Jamaica. Professor Lorna Goodison travels to Palaver 2016 from her home in British Columbia to recall and share moments, thoughts and the experiences that influenced and moulded generations of Caribbean people, whose collective contribution in various fields of endeavour have influenced and indeed changed the course of history.

The Palaver International Literary Festival, an annual celebration of Caribbean literature, music and cuisine, celebrates the monumental contribution of Lorna Goodison at its second renewal, August 6 and 7, 2016.