The province of Ontario last year saw the birth of a new multi-cultural event to celebrate literature and the arts.

The main events were held at the park at Wasaga Beach Area 4 and at the Wasaga Beach RecPlex Auditorium. The garden space and Gazebo at the Oakview Woods Outdoor Complex was used as a welcome-reception area.

Wasaga Beach Area 4, meticulously maintained and administered by Ontario Parks, provided an idyllic backdrop of beautiful lake Huron and the distant Blue Mountain range which seemed to rise out of the water. With some of the most dramatic sunsets in southern Ontario, Wasaga Beach provides the ideal setting for Palaver.

The Official Opening Ceremony for Palaver was held at noon on Saturday August 8. It was attended by a number of the town’s representatives, including the Mayor of Wasaga Beach, His Worship Brian Smith who gave the welcome address and Councillor Sylvia Bray. The Chair of the Wasaga Beach Film Festival, Gary Cerantola, addressed the gathering about the positive role of festivals such as Palaver in building the creative economy. Dr. Rita Cox, as the guest speaker, addressed the theme ‘fostering a culture of understanding’.

Following the opening ceremony, the inaugural Palaver festival got underway with the event ‘Books And Authors’. Against a stunning scenic backdrop at Wasaga Beach Area 4, authors Ewart Walters, Olive Senior, Pamela Mordecai, Rachel Manley, Owen Ellis and Dwayne Morgan shared recently published and award-winning works. The readings were of a very high standard and well received. In some moments the audience was spellbound, in total silence. In other moments, peals of laughter erupted from the tents.

The first day of the festival ended with a live show on stage at the Wasaga Beach RecPlex, headlined by Ernie Smith and featuring Blakka Ellis; and, a cameo appearance by Jamaican composer, arranger and orchestra-leader Carlos Malcolm (of Carlos Malcolm and the Afro-Jamaican Rhythms orchestra of the 1960s and 70s). 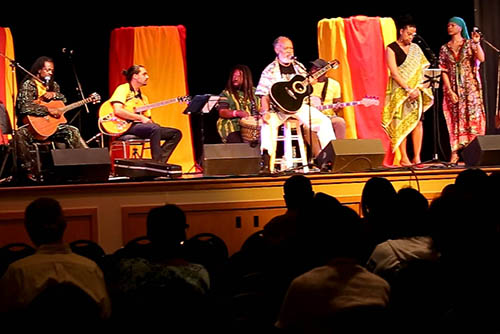 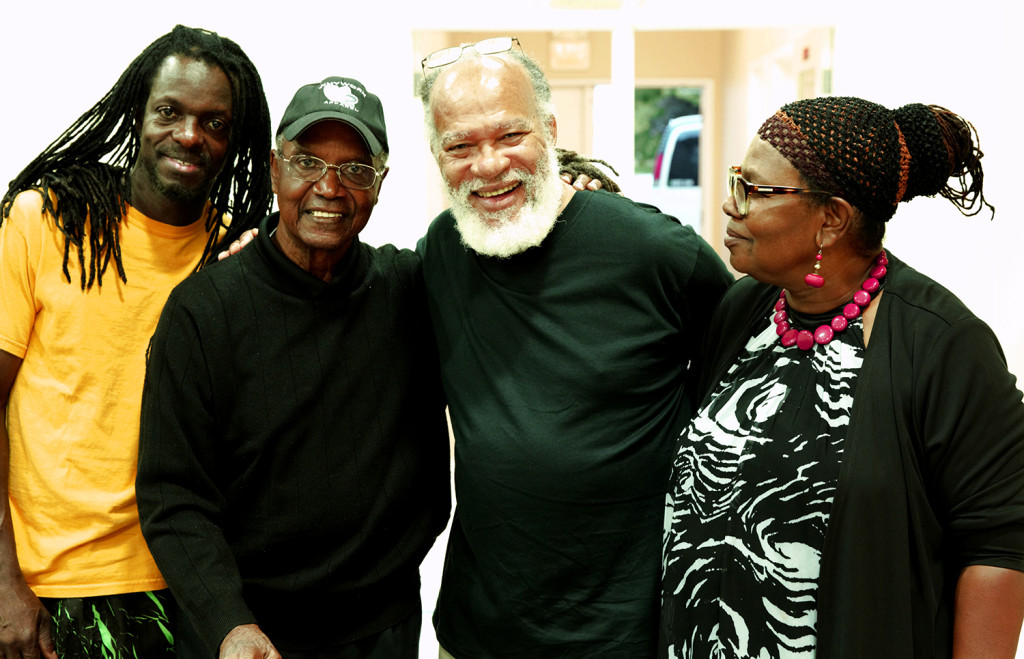 The star of the show, celebrated Jamaican song-writer and performer, Ernie Smith presented a repertoire of traditional folk songs. He and his ensemble got stout vocal support from an appreciative audience. Some, not content to simply sing-along, abandoned their chairs and danced in the aisles and at the back of the auditorium. Palaver was born.

A FEAST ON THE BEACH

The park at Wasaga Beach Area 4 provided the perfect setting for the Sunday brunch buffet on the final day. ‘Aromas from the Great House’ was the theme of the Jamaican brunch buffet. With the clear blue waters of the Georgian Bay and the distant Blue Mountain range as a backdrop, the sumptuous and copious buffet presented by celebrated master chef and author Selwyn Richards was a feast for the eyes and the palate.

The buffet was followed by ‘Ol’ Time Story’ with Dr. Rita Cox. A story-teller of renown, Dr. Cox had her audience in laughter as she related the antics of mythical Caribbean folk- hero, Brer’ Anancy to bring the curtain down on the first Palaver International Literary Festival.