The Heritage Singers for Palaver 2016 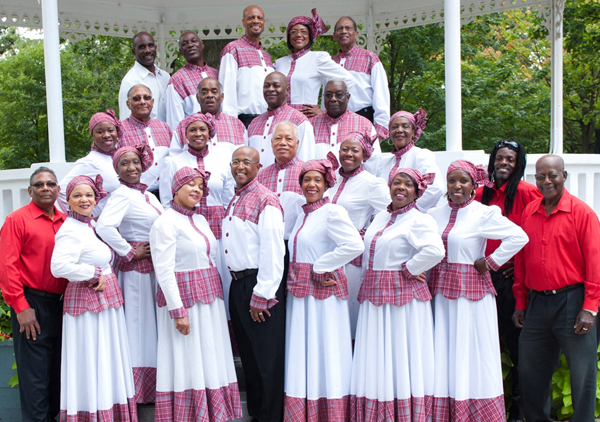 Thirty and more years ago when Grace Carter-Henry Lyon thought about establishing a musical ensemble that would give life to the history recorded in the traditional folk songs of the Caribbean, she was acutely cognizant of the importance of achieving excellence.
As a member of the Jamaican Folk Singers in the land of her forefathers, Grace’s talents and work ethic were honed in a learning environment created and sustained by the celebrated and renowned Jamaican folklorist and musicologist, Dr. The Hon. Olive Lewin. The ‘Jamaican Folk Singers’ as an ensemble, like the country’s National Dance Theatre Company, became icons of excellence in newly independent Jamaica. And the meticulous care and attention to detail; the relentless work and drill that ensured high quality standards were acknowledged as the key elements of the respect earned even among their compatriots.
Excellence was therefore the watchword of the Heritage Singers. It is this measure of the highest standard that inspired the organization at the time of its founding and today. Celebrating its 30th anniversary next year (2017), the ‪‎Heritage‬ Singers ensemble has thrilled audiences at home and abroad with pure, exhilarating sounds and cultural authenticity.
The 30 member group blends a range of voices and cultures. Its membership of Canadians embodies cultural nuances from the Caribbean, Africa and South Asia. In three decades it has developed an expansive repertoire of sacred and secular songs – work songs and lullabies, sad songs and happy songs.
“The language of these songs range from discernible Standard English Creole with an English‐Lexical base, to French patois … even bastardized Spanish and African dialect,” Grace explained.
The rich, delightful strains of authentic ‪‎folk music‬ from this now famous Canadian ensemble will highlight the after-dinner entertainment programme at the ‪#‎Palaver‬ International Literary Festival’s Awards Dinner in Wasaga Beach on August 6.
The ‪‎Palaver Festival‬ Awards Dinner this year falls on the anniversary date of Jamaica’s Independence and the theme for the event, to be held at the ‪#‎WasagaBeach‬ RecPlex, is ‘A Birthday Toast to Jamaica’